Skip to navigation | Skip to main content | Skip to footer

Last day of the dinosaur

What happens when a meteorite 10km in diameter smashes into Earth? Let’s ask the dinosaurs!

65 Million Years ago the ‘age of the dinosaurs’ came to an abrupt end. This highly successful group of vertebrates had prospered for over 160 million years, but went extinct (bar their descendants the birds) at the end of the Cretaceous Period.

Recognising the effects of the Cretaceous impact event are essential to understanding the global-scale collapse of ecosystems that mark the end of the age of the dinosaurs, or the Cretaceous-Paleogene (KPg) mass-extinction. We can help resolve the timing of this global event through a newly discovered deposit in the Hell Creek Formation (North Dakota, USA). But, before we visit North Dakota, it is worth explaining a little more about extinction. 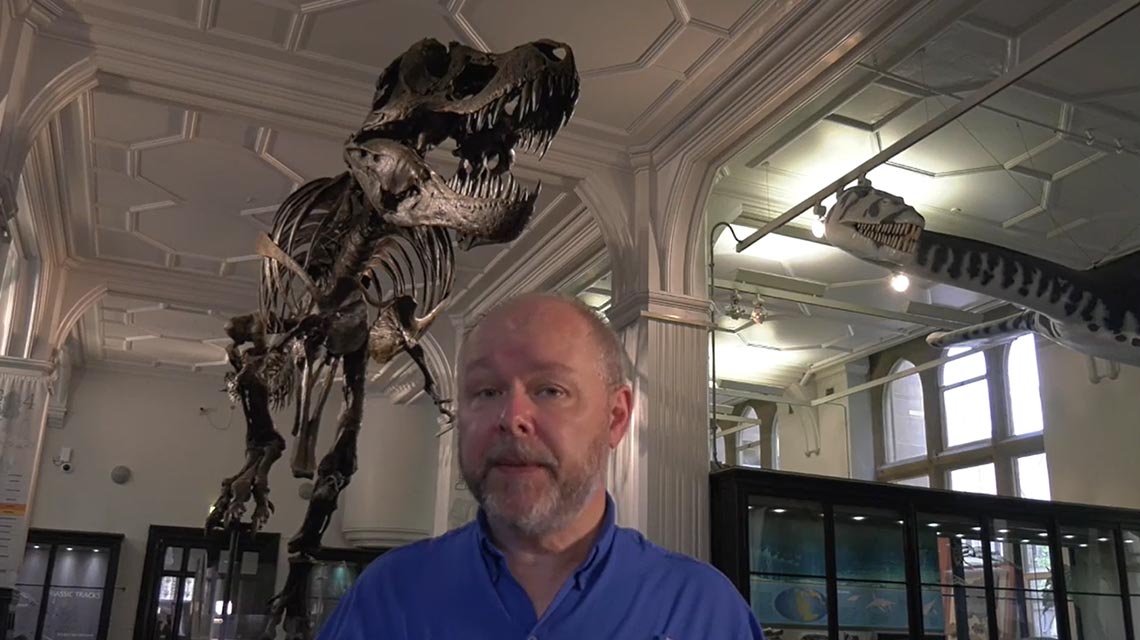 The Chicxulub meteorite impact is considered a major cause of the KPg mass-extinction event. The impact is evidenced by a vast 170 km wide crater beneath the Yucatan Peninsula (centred on the Mexican village of Chicxulub). This is possibly the best known of the five largest mass extinction events to effect Earth. An international team of scientists, led by Robert Depalma (a PhD student at The University of Manchester) have begun to publish research on a new site in North Dakota (USA) that has completely changed how we view the last day of the Cretaceous. They have named their site ‘Tanis’ after the Egyptian city being excavated in the Indiana Jones movie, ‘Raiders of the Lost Ark’.

The Tanis site was discovered in the dinosaur-rich Badlands of the Hell Creek Formation, famous for the fossil remains of the iconic T. rex and Triceratops (some of the last dinosaurs on Earth). Debris was blasted over 3000 km from the impact site that is now the Yucatan Peninsula (Mexico) to Tanis. The ‘impacter’ was a ~10 km-wide meteorite travelling at ~64,000 kph that smashed into Earth with extraordinary force. The tell-tail presence at the site of the rare Earth element Iridium, also places it as ‘End Cretaceous’, as this element is used globally mark the KPg boundary layer, the point in time when dinosaurs became extinct. ‘Blast’ debris from the impact included small (1-5 mm) glass-like melt material (‘tektites’ and ‘microkrystites’) that were ejected quickly into the atmosphere at ballistic velocities, raining down on Tanis. The teams' calculations indicate that the tektites at Tanis would have arrived at approximately the same time as a series of enormous shock waves from the impact event. These shock waves were capable of causing massive wave excitation, and it is suggested by the team that they directly caused the remarkable ‘Event-Deposit’ that is being studied at Tanis.

If you place a glass of water on one end of a table and knock at the other end of the table, you will see how the small shock wave you generated will cause ripples in the water that is inside the glass. The shock wave from the impacting meteorite that travelled through the Earth’s crust, sent powerful pulses of energy through any water held in the world’s oceans, seas, rivers and lakes. At Tanis, sediments were rapidly deposited by repeated inland-directed water surges caused by this massive pulse of energy, like a ‘super-earthquake’.

Paddlefish that were swimming in the water body that was hit by the shock wave at Tanis were pushed up and out of their river onto the riverbanks, mixed with sand and mud that was also ‘shocked’ from the river channel. A tangle of fish bodies (see image), all facing the flow direction of the pulse of water, are magnificently preserved at the site. This was a pivotal moment in Earth’s history, as the ensuing mass-extinction directly paved the way for many species that populate the planet today, including ourselves.

The team reported their discovery in the the journal PNAS (published on Monday 1 April 2019). The Tanis site provides the first sub-24-hour timing of events after the impact event that had a major ‘impact’ on a mass extinction that saw the last day of the dinosaurs.

What this means for the future

We must not forget that extinction is nothing new to Earth and it has played a pivotal role in the ebb and flow of life for over 3.8 billion years. But the rapidity and scale of extinctions can combine to cause ruptures in Earth system equilibrium, which have previously converged five times to become mass-extinction events, such as that which saw the end of the ‘age of the dinosaurs’.

The Tanis research shows how critical it is that we must recognise the early signs of extinction, but also understand how life recovers from such events. This will enable us to better predict the impacts of climate and environmental change on biodiversity today from loss at local, national and global scales. The hindsight that the fossil record provides, enables us to make more informed decisions on biodiversity today and potentially in the future.

Discover more about how we're using the latest analytical techniques to the study of ancient life.

Department of Earth and Environmental Sciences

Learn more about how our research and study options are helping our understanding of the Earth.

Discover the project aiming to uncover some of the missing information about the history of the dinoasurs.

Summer Science at the Royal Society

Find out more about this year's summer science exhibitions, and how you can come along to our "Last day of the dinosaur" events.